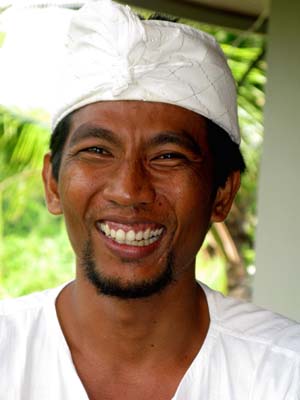 Wayan Balik has been my driver in Bali for many years.  I recently learned what the “Balik” in Wayan Balik means. Roughly it’s either, “second time around,” or, “turn around again.” My driver’s name is “turn around again.” It gives one pause.  In any case, our friendship has grown over time, along with his English and driving skills. I can always tell if he is thinking about our conversations instead of goofing and laughing as he usually does. First he stops passing other cars and then slows to half-speed.  With extreme thinking, he simply stops. This both amuses and frustrates me. I remember once having to ask my friends in the car with us to stop talking to Wayan or we would never get to the north coast of Bali. At the time, Wayan was behind a very slow truck and had many opportunities to pass, but he was busy thinking. After an embarrassing moment we all laughed, especially Wayan, and off we went. Over time, Wayan has learned to think and drive at the same time. 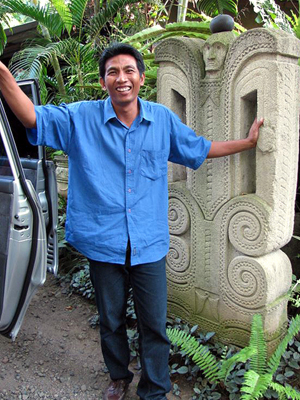 Wayan is my living, laughing Buddha. He’s my model of non-attached joy. He seems to live in an inner world where all humans are strange, funny creatures to whom very funny things happen all the time. One day he was late to pick me up in the morning,  a rare occurrence. While we were on the road, he said, “My house and my village flooded and we had to push stranded cars off the road.” Instead of telling me with grave concern, he told me as if he were living inside a Three Stooges movie, laughing with the audience. Every mishap, misunderstanding, personal foible, and stupid motorist is grist for the happy-mill. But there is always compassion mixed in with the laughter and fun. If I didn’t work so intently while in Bali, he and I could easily drive around all day talking and laughing at humans doing funny human things. His laughter is never at someone. He can laugh at me plenty, especially when I take stupidity too seriously, but he patiently waits until I can laugh with him, and it usually doesn’t take long. I love and treasure him. 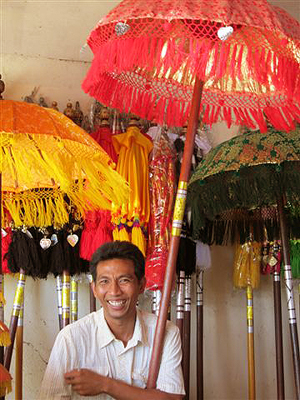 Yesterday he said something that was startlingly insightful.  Upon hearing this I told him he’s a very smart man, to which he replied, “No, not smart at all, really sort of stupid.” “Oh?” I inquired.  “Yes, very bad in school. Bad grades, bad in math and reading. I didn’t want to be in school.”  I assured him, “You know, we all learn in different ways and memorization isn’t always the best for smart people.” “I guess so,” he said. “I’m stupid in school, but I guess smart in life. I can see people. I can see how life works on the street and in the village.” Then he burst out laughing once again, telling me a story about his village. I thought to myself, “No kidding, you can see and see deeply enough to laugh. You are indeed my living, laughing Buddha.”

In January, I decided I wanted to make hundreds of grasshoppers out of palm leaves. I showed a photo to Wayan and he gave it to a man from his village that makes grasshoppers. The next day I was handed a wonderful palm leaf grasshopper. Over the next 10 days we made 5 new prototypes and progressively improved upon them until I had the ultimate model grasshopper.  During this process, we had the following conversation: 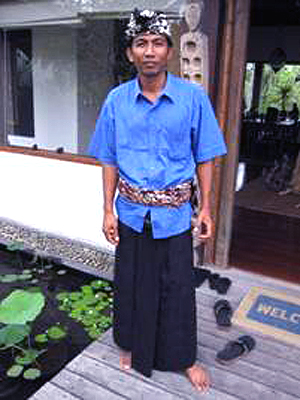 I could tell Wayan stories for pages and pages.

In September, in the midst of an intense work schedule of forty straight, 13 hour days, Wayan and I were driving to the warehouse again to work with the carvers. I turned to Wayan and very seriously said, “Wayan, what is the meaning of Life?” We slowed to a crawl as he looked deeply into his life.  After two or three minutes he stopped the car, and with a look of concentrated innocence simply said, “I forgot.”  “Oh,” I said, feigning disappointment.  I couldn’t stop a smile from touching the corners of my mouth and we looked at each other for a moment and laughed uproariously.  So much wisdom was spoken in just two words. I will always remember “I forgot” and “forever, maybe 10 years.”  My favorite saying has become “The truth will make you laugh.”

Wayan: “There’s a big barbeque next week. Do you want to go?” David: “I don’t think so, I am a vegetarian.”
Wayan: “Oh, don?t worry, it really is a people barbeque, they’re cremating the old queen.”  It doesn’t get better than this.

Having watched his English improve over the years, we’ve decided to teach Wayan some idioms that he can use on other English speakers to impress them. Mainly, it’s an opportunity to make stuff up to laugh about.  He has now added to his repertoire, “slept like a log,” “it’s raining cats and dogs,” and “I need to piss like a racehorse.”

One last story to tell.  Justin and I were asking Wayan about people who are scavengers. We inquired, “What is ok to scavenge and what is not ok to take? Where’s the line?” He could not say where the line is between scavenging and stealing, but to avoid confusion, his village recently put up a sign which says “No scavengers.” Knowing we were on to something good, we pushed him again for an answer. He slowed down (a good sign) and said very clearly, “Scavenging and stealing are two separate jobs, sometimes same person.”