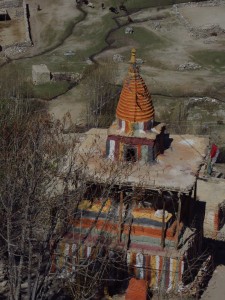 This ancient Mustang palace, abandoned 500 years ago after 400 years of use, is home to an unusual monastery museum. It is five stories high through only two rooms house the museum. The building is maintained only enough to keep it standing.

When we asked to see the museum, the village headman climbed up to the monastery to get the key. No luck. He ran back to the village as we waited and reappeared some twenty-five minutes later walking up the switchbacks to meet us. He clearly had the stride of a man without a key. He said the key is coming, but couldn’t say when.

In a land with a very different sense of time, “the key is coming,” is not what one wants to hear. Having seven hours of rigorous trekking ahead of us, we were concerned about time, especially knowing that by noon the winds would pick up and the trekking would become considerably more difficult. As we stood on a point high above the village, he started calling out to the village, “Bring the key! Bring the key!” Over and over like a chant, a chant that could be heard at least a mile away. 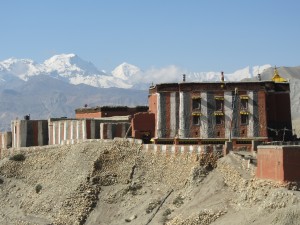 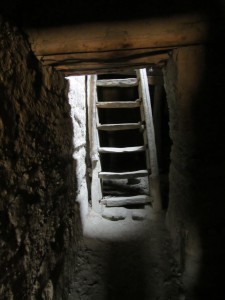 We were all in buoyant and playful moods, unperturbed by this setback. We learned the words to his chant, and thinking we would help out, we all started chanting/shouting to the village far below, “Bring the key. Bring the key! Bring the k-e-e-e-y-y-y-y!!” or whatever we were saying to whomever might listen. We all thought this was hysterically funny and laughed about it the rest of the day. How can you shout to a village, “Bring the key!” and expect a key to show up?

When we were about to give up and begin the day’s trek, we saw a monk coming up the switchbacks below, heading our way, carrying the magic key to an even more magical museum.