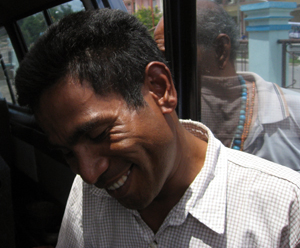 Ali is my friend from Sumba who guided me to see Pasola, the warriors-on-horseback festival on Sumba Island, Indonesia. Ali also scouts remote Sumba villages for me, looking for tribal art and artifacts. His opposites co-exist on his shirtsleeve. Aggressive and gentle, generous and blatantly self-interested, he accepts correction humbly, yet walks with that universal swagger of the arrogant or would-be arrogant. Each trait is always contested, at some point by its opposite. One never really knows which Ali will be on top in his war of opposites. Fortunately, his overriding attributes are loyalty and friendship. Ultimately, I can always count on him, though I cannot entirely trust him, as his self-interest is too highly developed for trust. I often have to remind him who he really is, in other words, the good Ali, to keep him on track.

Ali never stops making requests. “You must buy this from me. It’s old, good patina, and really good price.” I spend most of my time with him saying “No.” Eventually, he stops asking me to buy that piece and moves on to the next thing, the next request, and the next “No.” He knows there is always a “Yes” somewhere, so he never gives up. If I tell him he’s doing something wrong, he gets quiet, hangs his head, says, “Sorry, sorry, sorry,” and promises to change. It lasts about 30 seconds. He’s like a puppy, momentarily abashed and utterly irrepressible.

Any time of the day or night, I can get a text message that says, “Hi David,” that’s all, just, “Hi David.” It used to drive me crazy, and I’d ignore it, or text back, “What do you want, Ali?”, until I finally realized he just wanted to say “Hi.”

He talks too loudly, and too often, and acts, rather than thinks. Someone should lock up his cell phone. Thank God, he runs out of minutes on it almost daily. Streetwise, intuitive, and without discipline, he wants desperately to help with everything, but seems to have trouble taking any direction. Sometimes, his way of doing things even works!

Did I mention he has a huge heart, a hunger to learn, and unstoppable good energy?

One thought on “Ali”