Lindu, an artist’s artist, fits and breaks all the standard artist molds. When we first met four years ago, he was living alone. After a couple failed attempts at morning visits to see him, we learned to wait until mid-afternoon to show up at his shop/workshop/house/studio. If we arrived any earlier, he would be asleep or so blurry-eyed from working all night on his creations, that he was completely worthless. His workers were busy by 9 am, but there was never a sign of “the man” that early. In the hot Java afternoons, he was invariably shirtless, lean and brimming over with jokes, good humor, and playfulness, very much like the sculpture he makes. Dek dubbed him “the funny man” when I couldn’t keep everyone’s names straight during our trips to Java.

I found his art so irresistible that during my first meeting with him I asked him to plan for an exhibition in America. He refused to take me seriously. Each subsequent trip to Java I would ask him again to prepare for a show. Over time he has learned to say “yes” and proceed to give reasons why he could not do an exhibition that year.

On our next trip, Dek and I were shocked to find him two months married. His new wife was sweet, bright and utterly exasperated. She got more (or less) than she bargained for. “He never comes to bed at night and won’t get up in the morning. He only works and sleeps.” It wasn’t a complaint, more a worry about how life would turn out living with this happy madman. 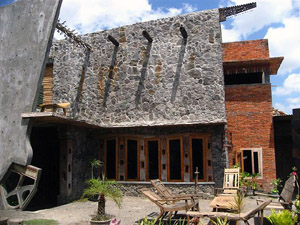 The next time in Java, Jakfar, Justin and I found Lindu still shirtless but not so lean. Regular meals and more sleep were taking their toll. He was almost done building a house for his beloved on the back of the property. It was a house James Hubbell or Anton Gaudi might have built, had they lived in Java. It was stunningly beautiful, rich in texture and materials, and playful throughout. He built it in the same vein he makes sculpture; full of surprises, humor and beauty. The house was his first acceptable excuse for not preparing for my exhibition.

If I ever build another house in Bali, I want his madness at work in the design process. We joked, laughed, ate treats his wife prepared, and played ping-pong on a sheet of plywood under a single light bulb until we were all dripping with sweat, happily exhausted, and ready for dinner and bed.

It is rewarding and inspiring to see a great artist change often and in wonderful new directions. Lindu’s soul-stretching, life-giving art has been evolving, as was he, in both his home and work life. On my latest trip to Java, in late January 2009, our schedule was such that we could only see Lindu in the morning. We called ahead to see if his wife could wake him up and get him moving. He was already at work.

By then, I’d given up on asking him to prepare for a show at David Alan Collection. I was resigned to buying what I could (or what he would allow me to buy from his personal collection), and showing his work as I was able. When we entered his shop we found an entire exhibition was available, by chance, not by design. I had only to choose my favorite twenty-five pieces, arrange for the shipping, and transfer the funds. As we walked through his gallery, piece after piece brought laughter, delight, and chills, as we recognized great art from the soul of a great man. Before this trip, I considered him to be one of a small handful of great living, producing, folk artists. Now his work had risen to a new level of purity, simplicity, and playfulness.

Lindu is now in his mid-thirties. What a gift to have found him, be able to share him with you, and to look forward to seeing decades of his evolving art and wonderful spirit.